We are wild about the Canary Islands and for good measure. The Canary archipelago features the perfect balance of long, pristine beaches, five-star accommodations, amazing foods and wine, exciting water sports, off-road adventuring, and more! Add in the near-perfect year-round weather and you have an ideal destination. Located about 70 miles off the coast of Morocco, the Canaries are comprised of 8 islands, each unique in their own way and with varied landscapes. The only question left is, which one is right for you?

Tenerife is the largest island in the archipelago and is the best suited for tourists who want to do it all. If you’ve never visited the Canaries, Tenerife is a terrific place to start. It offers 43 miles of white and black sand beaches, 2 UNESCO World Heritage Sites, and a remarkable variety of geographic options—from other-worldly desert landscapes, to mountain peaks, lush green forests, and stunning seascapes.

It’s easy to spend two weeks on Tenerife and experience something new each day. The southern coast of Tenerife is where most of the resorts are, thanks to its long stretches of white and golden sand beaches and temperate oceans. A stay in Tenerife would not be complete without a trip to Teide National Park, home to Mount Teide, the third highest volcano in the world and a UNESCO World Heritage Site. You can experience the inside of the crater rim, which some describe as a barren moonscape. Then take a cable car up Teide's cone, getting close to the summit for some of the most stunning views of the island.

Visitors also rave about Tenerife’s unique laurasilva forests. These green forests existed before the appearance of man on earth, as their origins date back around 20 million years ago. In these forests you will find ferns with fronds 5-6 feet in length. And after a hike through the forest, why not taste top-quality wines from one of the local vineyards. Some vineyards feature varietals found in very limited places in the world, plus organic grapes, since there are so few bugs native to the island.

Tenerife is also popular with families. The kid in all of us can enjoy a visit to Loro Parque, the #1 rated zoo in Europe, which is home to the rare blue parrot. Then spend a day at Siam Park, the largest water park in Europe. Other excursions may include whale and dolphin watching, where you can see 21 different species frequenting the waters; bottlenose dolphins and pilot whales are the most common.

While La Gomera is the third smallest of the eight Canary Islands, it is one of the most popular thanks to its natural beauty. The island has a handful of small hotels, beaches and restaurants, but most visitors prefer to visit La Gomera via ferry as a day trip from nearby Tenerife. The island’s terrain is dominated by Garajonay National Park, the world's largest pre-glacial forest and a UNESCO World Heritage Site. It’s a natural paradise, home to species that have disappeared in other parts of the world. Visitors can walk through a green mass of prehistoric vegetation unique to the Macaronesian region. Millions of years ago, this vegetation covered the tropics and now survives only in La Gomera thanks to its temperate climate.

A day trip around the island also includes visits to the capital of San Sebastian - once visited by Christopher Columbus on his way to discover the new world - and Agulo, a small village known as the “jewel of La Gomera”, which sits up on a natural platform giving visitors an expansive views of the ocean. The stunning panoramic views provided while touring the island are worth the visit alone.

Lanzarote is the northern and easternmost island of the Canaries and is home to some of the most beautiful nature of the archipelago. Similar to Tenerife, Lanzarote has a wide array of accommodations with beaches of golden sand and bright blue waters. The island was declared a Biosphere Reserve by UNESCO in 1993. And in 2015, it became the first destination in the world to receive a Biosphere Responsible Tourism Certification.

One of the most popular excursions when visiting Lanzarote is to Timanfaya National Park, which features tours of the island’s (still-active) volcanos. Another adventure includes visiting the Cueva de los Verdes, a seven-kilometer-long volcanic tube which was formed about 4,000 years ago when the surface of a lava flow cooled and hardened while the molten river of lava still flowed beneath it. At the end of these tubes are the famous Jameos Dal Aqua lava caves, which are a series of beautiful natural spaces turned into an underground concert hall, restaurant, and Salt Lake molded by the hand of the artist César Manrique.

Beaches, beaches, and more beaches! For those visitors who love to sit on the beach, the south coast of Gran Canaria should be at the top of your travel list. In fact, almost a quarter of the island of Gran Canaria is beach. This includes a protected reserve of huge sand dunes stretching in layers out to the sea.

Gran Canaria is in the middle of the Canaries and is the southernmost autonomous community of Spain. It is considered the capital island of the Canary archipelago and is most frequented by European visitors looking to take a break. It has been referred to as a “mini continent” due to the variety of terrain and activity. The beaches and resorts blanketing the southside of the island are the main attraction, but visitors to Gran Canaria can also trek through the Canary pine forests (a UNESCO Biosphere Reserve), take a day trip to some small seaside fishing villages, visit one of Gran Canaria’s cultural museums, or check into a wide range of spas and wellness centers.

While Fuerteventura is almost as big as Tenerife, it isn’t as popular a destination. The summer trade winds and winter swells of the Atlantic make this a year-round surfers' paradise. Sailors, scuba divers, and big-game fishermen are all drawn to these clear blue Atlantic waters where whales, dolphins, marlin, and turtles are all common sights.

La Palma is to the northwest of the archipelago. Visitors enjoy its incredible landscapes, imposing volcanoes, and deep forests. In 2002, UNESCO declared the whole island of La Palma a World Biosphere Reserve and there’s even a strict light pollution law which makes it ideal for stargazers. This island has less hotels (and thus less visitors) than some of the other islands. It does have a cruise port big enough to attract some of the passing vessels looking to add the Canary Islands to their ports of call.

South of La Palma is the second smallest island of El Hierro. Accessible by ferry and a small, local airport, El Hierro has a few family-owned B&Bs and hotels, as construction is limited by almost the whole island being a UNESCO World Biosphere Reserve. Due to these limitations, the island is charming and very quiet and, compared to the other islands, without any luxury or over-tourism. It maintains a more traditional look and social structure that we know from colonial Spain.

Last on our list, the tiny island of La Graciosa, a 35-minute ferry ride from nearby Lanzarote. With a population of around 700 residents - and sporting unpaved sand roads that are mostly traversed by foot or bike - it’s the smallest of the archipelago. It only officially became an island in the Canary archipelago in 2018. It has a quaint port, and a few mostly deserted beaches. It does have some small B&Bs and bar-restaurants, but more ideal for those that truly want to get away for a day trip.

Whichever Canary island is best for you, there is so much to explore and experience; that’s the reason they are one of our favorite destinations here at Quest Travel Adventures. Let us help provide exciting and unique trips to these unique destinations. Call us today for a customized quote at 1800-693-1815 or visit our website and take a look at our Canary Islands packages here.

Gastronomy in the Canary Islands 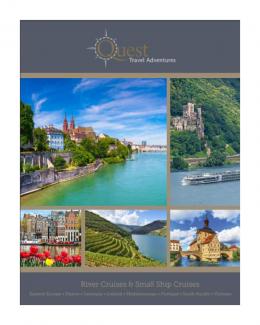